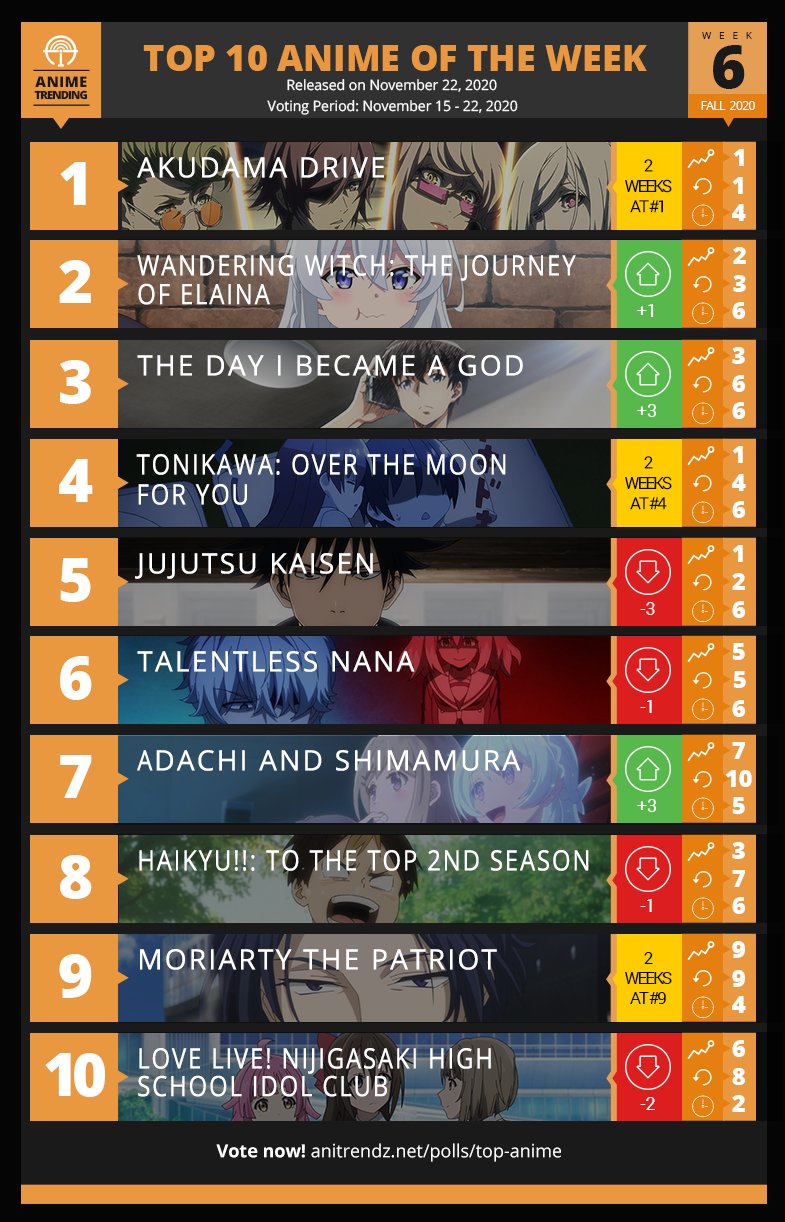 Naturally eveyone has their own preferences. As for me, i really liked Noblesse ngl.

@TheKShell It's not just you, Haikyuu!! hype has completely ended in the last two weeks xD Sadly but The show is getting really boring IMO

Tonikaku Kawaii is chilling out there, anime got a lot of attention, but I have no problem with it, huh, Atleast show does not lack a lot, and is also enjoyable, Atleast it's a better Romo Como anime than anime like RaG, isn't it~

The Day I became God is actually preety good, and latest Episode is Really very good, But But I never thought it would go straight from sixth to third Spot.

Wandering Witch, It has become more popular than I expected, yes it is true that it's on very high position, #2 really very high, in my opinion the show should be at most #5 or #6. it's not like anime is far superior than the other's but it still not so bad.

Actually, The previous seasons of Mahouka Koukou no RettouseI and Dungeon ni Deai wo Motomeru no wa Machigatteiru Darou ka have not been seen by many people, including me. So the people who continue the series are the ones who vote for it every week. I can't say whether it should be in the top 10, But it looks like the fans are disappointed.

I don't really know what to say about Adachi and Shimamura and Morality: The Patriot, I Think A&S is in the right place (?) And I haven’t started Morality yet, I can't say anything about that.

Talentless Nana was supposed to be a bit higher, but Nana is getting a lot of hate, as well as a lot of people dropping anime after the first or second episode, not just that In the previous episode, she was going to be harrased somehow, people didn't like it. For many such reasons, the show has started to get less liked by people; But they are wrong about it...

Jujutsu kaisen has been trending #1 every week in japan and Gojou too, current poll is based on this weeks episode also I too agree that Akudama Drive is way better than JJK in terms of this week and its episode, But I do think It gains much attention after the previous week's episode, Yeah but for me AD is like a Wallpaper anime, I haven't read the manga, I think, They have to tell the Plot a little more, don't they?

What do you Think About When they Cry and Noblesse, Should they also be a part of this list? 'cuz I don't think so , I recently dropped both.

Is it just me or anyone else think Our Last Crusade or the Rise of a New World, Kuma Kuma Kuma Bear, Golden Kamuy S3 massively Underrated.

@Simon wangxu at least Noblesse is in 11th place.

It really isn't. Just when compared to its source material and other WEBTOON adaptations, it comes off as the worst one. It's a decent anime IMO.

btw I haven’t even read the webtoon and I don’t like the anime itself..cause I don’t find appealing any of the characters, especially the protagonist (who as for now is pretty non existent) or any of the villains and the plot is boring. I hope it will get better.

(fyi you both tagged the wrong username)

🤣sorry for the wrong tag