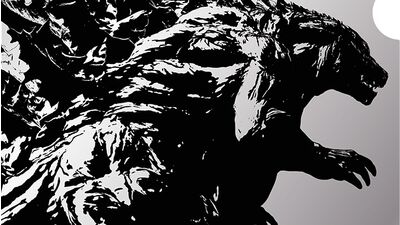 Godzilla (ゴジラ, Gojira?) is a 1954 tokusatsu kaiju film produced by Toho Company Ltd., the first installment in the Godzilla series and the inspiration for three anime films by Polygon Pictures: Godzilla: Kaijuu Wakusei (Godzilla: Planet of the Monsters) released on November 17, 2017, Godzilla...

First, i know that SAO can’t fit very well with Kaijus, because one is an anime with people that fight with swords, and one is a saga when the humans fight some giant monsters

Well.. imagine if the SAO characters (or even others) will play a game based on Godzilla!

This time, the game isn’t created to trap the people inside the game, but would be a Virus (Ghidorah?).

Imagine that the rules says that to escape by the game, it’s necessary to beat the strongest boss in the game: Godzilla, that would be practically invincible, and this can be pre principal reasons of a lot of future deaths

Also, imagine that there’s the possibility to construct some weapons around the “city”. This can be an opportunity to make MechaGodzilla, or Jet Jaguar, or Moguera.

The monster would be practically all (divided in submonsters, flying monsters and terrain monsters, and monsters with special attacks)

The dangerous ones can be Manda, Caesar, Rodan, Anguirus, Gabara and Titanosaurus

Also, it possible to add some aliens, like Orga, Gigan or Megalon, as other kinds of Monsters

It’s just an idea. SAO is famous, and Japanese. Is unfair that the creator don’t have decided to make a collaboration with the Toho yet! What you think?

(edited by moderator)
Sword Art OnlineGodzilla
This post is locked.

I know that the animations were different, and that maybe it can’t have some of Anime pop common culture, BUT OMG ITS ALWAYS A GODZILLA MOVIE! A MOVIE ABOUT ONE OF STRONGEST KAIJU EVER!! HE NEED MORE RESPECT C’MON.