In the preface, I gave you a rundown on pachinko and its popularity. One of the long-running franchises of pachinko and pachisuro/pachislot machines (Japanese slot machines descended from pachinko) is Senguko Otome (Warring States Maidens), manufactured by Heiwa Corporation. The franchise just celebrated its 10th anniversary and there was even a variation called “Otome Masters” with the characters playing golf because Heiwa has a division that runs golf courses.

Heiwa took the events of Oda Nobunaga’s attempt to unify Japan in the late 16th century and used it as the basis for the first game, changing each person into a woman, giving some of them armor that makes it clear they are women (the trope known as “chainmail bikinis”), oversized/fantastic weapons and abilities, and a goal/object they can fight over. This was woven into the mechanics of a pachinko machine as discussed previously. To coincide with the release of the second pachinko machine, the anime series Sengoku Otome ~Momoiro Paradokkusu~ (the English name is changed slightly to Battle Girls: Time Paradox) premiered on Japanese TV in April 2011. 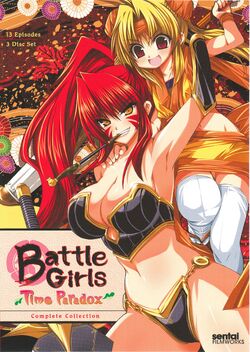 Before I go into the main part of the review, I want you to take a moment to look at the cover artwork for the English-dubbed version of the series. Make a note of what your impressions of it are. We’ll come back to this later.

In the series, a schoolgirl nicknamed Hideyoshi is in danger of flunking her classes because she values her social life and doesn’t want to give any of that time up for school work or getting up earlier so she won’t be late to class any more. Her teacher tells her she’s got one last chance to avoid summer school. Her friends tell her the same thing but she doesn’t accept it.

On her way home, Hideyoshi tries to figure out a way to avoid it without giving up her activities. A random comment from a passerby leads her to a temple where she takes a chance in purchasing a pre-made prayer card that says it will help her studies. Think of it as kind of a lottery ticket. She accidentally interrupts a spell someone is casting in the temple, and before she knows it, she’s in the midst of a fight between one woman and several female raiders.

This is the first of several encounters with people she thinks she knows, but as it becomes clearer this isn’t actually her friend from school (even though that doesn’t stop her from calling this person by her friend’s name), she begins trying to make sense of the world around her by relating it to things like cosplay and someone being a tsundere (the initially cold character that gradually becomes friendlier).

The battle ends with the arrival of Oda Nobunaga, Lord of the Owari Province. Back at her castle, Nobunaga’s heart sees something in Hideyoshi beyond a giggly and unusual young girl, and invites Hideyoshi to join in her quest to collect pieces of armor that will help her conquer the land. Hideyoshi doesn’t understand but goes along with it anyway.

Over the course of the next twelve episodes, that quest unfolds, with several intense battles over the armor. Hideyoshi deals with new questions, such as “Why are there only women in this world?”, “What’s up with the talking dog that seems to know a lot about this place?”, “Why is everyone trying to ply me with favors when all I want to do is put on a play?” and a Hobbit’s focus on when her next meal will be. What she wouldn’t give for a hamburger and some catsup.

I asked earlier for you to make a note of your impressions of the cover artwork for the home video release. Here’s mine from back in December.

Sentai Filmworks had a Black Friday sale that I missed out on because I just didn’t get around to ordering anything. But a lot of the same items went onto a second sale around Christmas. This time, I did want to get some of them.

Sort them by prices low-to-high. I don’t really need Blu-ray versions, so there’s a lot of DVDs to choose from for a few bucks each. One’s called “Battle Girls: Time Paradox”. The picture’s got a striking woman front and center with “huge tracts of land”. Let’s see what’s it’s about. Hmm. Well, that sounds interesting. Okay, it’s worth a shot. It’s only five bucks right now. Add to cart.

So, there, I admit it. I might have passed this by except for the pretty woman on the cover. One of the reviews I read while researching for my own review was similarly dismissive, saying that there wasn’t a lot of substance in the episodes and it was really just an excuse to show large-chested women in skimpy outfits fighting. With the way the end credits are presented and the couple of bathing scenes that have nudity in it, it would be easy to think that’s all it was.

But while watching the series the first time, I noticed that when one episode ended, I wanted to watch the next one right away. I didn’t really care about skin being shown. I wanted to learn more about this world.

Let’s visit that picture again. Use this link to see a higher-resolution version.

Look past the cleavage, past the stripes on Nobunaga’s face. What do you see?

What I see after having watched the series twice now is someone who is fierce, strong, confident in her abilities, and maybe enjoys the challenges that come with being a leader. Above her is Hideyoshi. This one’s a little harder to pin down because what I see is a person that’s anticipating and eager to be in a battle, and that’s not the Hideyoshi we meet in Time Paradox.

The reason for that is the front cover uses artwork of the characters for the pachinko games and not this series. The only way I found this out was by learning more about the world and the company that makes the games. As with many things in life, I learned more by looking past the surface.

On the surface, you could call this anime “The Japanese Middle School Girl in Queen Arthur’s Court”. But in many ways, this isn’t Hideyoshi’s story. In the end, she still has many of the same problems she had before, but now receives a little more empathy from someone who went through it with her.

Time Paradox is everyone else’s story of learning to look at things in new ways because they met her. The ditzy, innocent, honest, whiny, always hungry girl whose moods can swing in an instant from “I’m tired and I can’t walk any further!” to “What are you waiting for? There’s food/a room/etc. just up ahead.”

By giving this series a chance, I got to watch a leader who knew mostly how to use force to deal with problems change into someone who exhibits compassion instead. Someone who learned the real meaning of what her grandmother tried to teach her as a girl. Someone who was on their way to learning it, but it took Hideyoshi’s arrival to help her complete the journey.

I saw another struggle with feelings of duty, devotion and love when confronted with what she thought was a rival for her Lord’s attentions and affections. I saw others who liked giving big introductions of themselves get put in their place.

I watched an episode involving putting on a play that had the earmarks of fanservice and cliches about how men react to certain things, or in this case, the talking dog, include a very nice and subtle continuation of an earlier episode about how someone can’t tell a story.

I heard moving and dramatic music. I heard music used for comedic effect with a “not our problem, we’re out of here” impact. I heard music that invoked the Pirates of the Caribbean theme.

And because I learned more about this world, I found an answer to a complaint in another review. It pointed out that people should have been calling Hideyoshi a demon or witch instead of just going along with her strange behavior and use of a contraption like a cell phone. It took me a while to figure it out, but it does seem to fit.

This is one of the best purchases I’ve made in a long time. I can’t remember reacting like that before. Going into a completely new subject and the search for info about it kept turning up more and more information. Realizing that there’s a limited amount of time for preserving some of it (the video game Sengoku Otome: Legend Battle was only made for the Playstation Vita, the Vita production run has ended and I don’t own one). Wishing I had about ten million dollars just lying around so I could import the pachinko and pachislot machines and hire Sentai Filmworks to get the cast of Time Paradox to dub the games into English.

As Oda Nobunaga said about Hideyoshi, Battle Girls: Time Paradox is “a fresh wind that we cannot foresee”. Netflix doesn’t have it for rent, but obviously, I don’t think you’ll be disappointed if you buy it.