BSP surprised me when it came to background music. I was watching an episode and suddenly thought, “That’s beautiful. Does this have a soundtrack?” The answer is yes. The complete original soundtrack has two CDs for the TV series and one for the movie. Almost all songs are around a minute thirty or forty, but it’s over two hours total in a wide range of styles, from techno to jazz to classical to humorous with a slide whistle and steel drums. About half of the songs on the third disc are extended/reworked versions from the TV series. Almost all songs on the three CDs are great candidates for becoming ringtones for your phone, which I’m going to be working on. I might have enough to change the ringtone every day for an entire month. I got the soundtrack and some related CDs through CDJapan. You can view the track list in English over at VGMdb or here at the page listed above for the complete soundtrack.

This is the only series where I listened to the title song and the end credits every time I watched an episode, and I’ve watched the series three times and the movie twice. Usually, I tune it out after a few times, put it on mute or hit fast forward. Not with BSP. “Mugen no Ai” has a lot of contrasts and opposites in it and how we are children of the stars, with some phrases I like just because the original Japanese lyrics have internal rhyming: “Itsudatte namidame” (“always crying”) and how the words for fate and destiny are unmei and shukumei. I think the men’s choir and the use of bells in the song really helps sell it. “Lost Child” is about Marika’s two lives and is accompanied by images showing them merging together. The two songs work together as bookends for each episode, with an occasional substitution of other songs like “Black Holy”.

Both the title sequence and end credits sequence show that all 26 episodes of the TV series were planned out in advance, rather than the one year at a time other shows go through, because some of the characters in the opening and some of the outfits in the credits didn’t appear until the end of the first year or all the way up until almost the end of the series. There are changes as the episodes go on, where more people are shown as the number of people Marika encounters changes. There’s also changes in the end credits to Marika’s pirate outfit that match what she wears in the episodes. 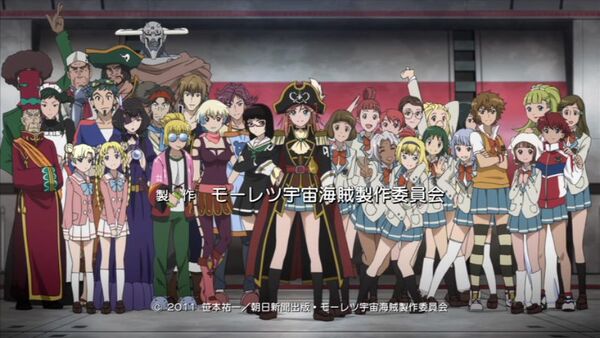 Poor Show. Even being a pacifist and the friendly head of a large insurance agency isn’t enough to prevent being obscured by a guy with a tall hat.

If I have to find fault in BSP so this isn’t just a gushing review of the series, there’s three points. The first one is pretty common in animated series of all types. Everyone usually wears the same clothes all the time, with few exceptions. Part of this is due there being three main locations where most everything takes place: the Academy, the Lamp House Cafe and on the Bentenmaru. Marika takes it further and wears her school uniform everywhere she goes. She’s perfectly comfortable wearing a school uniform that has a miniskirt, but the one time she tries putting on a disguise of a business suit and sunglasses, she complains that its skirt is too short, even though it’s the same length as her uniform’s skirt.

The biggest change in clothing occurs when the Yacht Club helps Marika with a pirating gig and they wear cosplay outfits like a wizard and a police constable instead of pirate-themed outfits. Surprisingly, it goes over well with the passengers they’re robbing (a lot of pirating is staged and insurance companies reimburse the thefts). With the attention given to the title sequence and end credits where they took the time to update them as events changed in the episodes, it’s disappointing to see they didn’t put more variety into the clothing people wear day-to-day.

Second would be “over-naming syndrome”. Instead of saying something like “We’ll turn tail and run”, it’s “The Bentenmaru will turn tail and run”. Proper names and titles are used all the time when being a little more informal would be more natural and save a lot of dialogue. It’s even pointed out in one of the episodes where Marika meets Princess Gruier Serenity, who formally introduces herself, then Marika formally introduces herself, then it repeats a short time later and Marika comments on it. Since the series comes from Japan where formality is the norm, it’s to be expected, but I could do without it so much. It does set up a running gag where a no-nonsense teenager named Chiaki Kurihara keeps telling everyone, “There’s no -chan” when they call her “Chiaki-chan”. She doesn’t like being called cute.

The last is the name of the light novels the series is based on: Minisuka Pairētsu or Minisuka Uchū Kaizoku. “Miniskirt (Space) Pirates” is spot on and I know the name was likely chosen because some readers would be very interested in seeing drawings of middle school and high school girls in miniskirts. It’s the “hook” or gimmick. I think it does a disservice to a series that might sell itself short at first glance. “Bodacious Space Pirates” is a better name, given the first seven definitions: blatant, unmistakable, remarkable, outstanding, audacious, bold, brazen. Marika Kato isn’t blatant or brazen yet. She’s a teenager, after all, and makes mistakes like everyone and has to figure out this new life she’s drawn into, but she exemplifies the other five qualities. As to sexy or voluptuous, that’s a discussion that needs to wait until she’s about ten years older.

Okay, I’ll add a fourth. The movie included one sentient or artificially intelligent mecha. Maybe those are more common in the light novels, or it’s unique to the movie and the manga that was adapted from the movie. It seemed like the movie could have done with a standard ship instead.

When I wrote this review for a different site, I teased it with the following mini-parody, to be sung to the tune of "I Wanna Be a Producer" from the Mel Brooks musical, The Producers.

That refers to Ririka Kato, who had been pirate aboard the Bentenmaru with Marika’s father, Gonzaemon. There’s no indication if he and Ririka were married, but she gave up pirating to raise Marika. Once she sees Marika settling in as captain, she decides on a career change away from being an aircraft controller. Yeah, that isn’t stressful at all.

Throughout the series, people talk about the quality of her character and how she exudes what Will Smith once called “nuclear cool”. (He was referring to The Fonz from Happy Days.) It takes a while, but we finally see why she’s called “Blaster Ririka”. She has more than just a proficiency with firearms. She’s someone you can trust to protect your life with those weapons without being careless in their use. And her pot-au-feu gets complements and rave reviews.

I’m going to leave you with a couple of things to look forward to. There’s a World War II reference in the TV series and another in the movie, and there is a multi-layered Easter egg in one of the last episodes. You’ll have to hit pause to catch it. It takes a little bit of research to figure it out, but once you do, it’s really clever. It’s very obscure so if you can’t find it or can’t figure it out, send me a private message and I’ll point you in the right direction.

Bodacious Space Pirates is available on Crunchyroll, Amazon and iTunes but not the movie on any of them. Buying a DVD or Blu-ray version will help with being able to pick up on the details like the Easter egg. The prices at Sentai Filmworks are a little lower than over at RightStuff. Haven’t checked Amazon yet, but I don’t need to. I got the series and the movie on the Sentai Filmworks holiday sale in December for a total of $8 for the DVD versions. So I didn’t have to do any pirating of my own in order to see a great anime series.